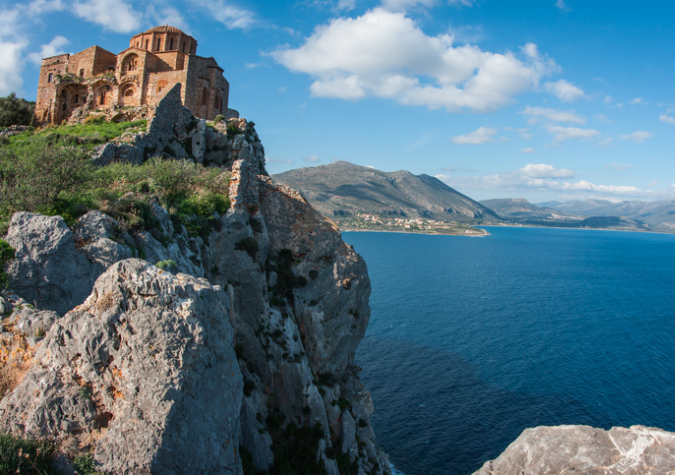 Nestled amid mountains, perched on cliff-tops or simply remote and gloriously tranquil, here are some of the top hidden spots in Greece:

Monemvasia is blessed with a perfectly preserved medieval fortress perched upon a monolithic slab of rock on the eastern coast of mainland Greece’s Peloponnese.

Here you will find excellent beaches, a cobble-stoned village and a wealth of Byzantine, Ottoman, and Venetian history dating back to the 13th century – perfect for adding a little history and exploration to your romantic trip. Enter the islet via a narrow, fortified tunnel and you will soon emerge at Monemvasia’s fascinating medieval world. Walk up the cobbled street to the main square and the 13th century Cathedral of Christ in Chains. 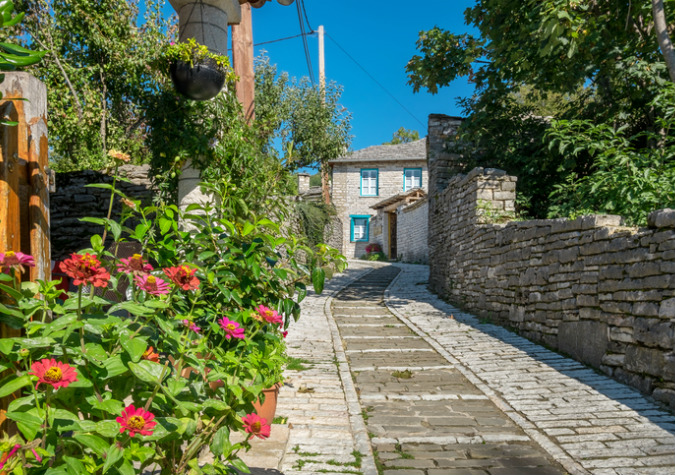 North western Greece’s pine-clad Pindus Mountains in the Zagoria region are home to 46 ancient, untouched villages making a visit feel like an exploration of a secret kingdom. Clad in dense forest ablaze with autumn colours and home to eagles, bears and wolves, Epirus’s bountiful landscape is protected by Vikos–Aoös National Park, famed for the wonderful River Aoös and Vikos Gorge.

The gaping Vikos Gorge is one of the deepest in the world where hikers enjoy cool breezes and tree-shaded pathways which make trekking here perfectly comfortable, even in mid-summer. You can tackle the Gorge on two or three different hikes: from the stone village of Monodendri northwards to Vikos with St Paraskevi Monastery perched above the ravine; from Monodendri to Kipi; and from Vikos to Papingo.

Alternatively, follow the gentle trail running from Pápigo to the shelter near the peak at Astráka and onwards to Drakolimni, an idyllic alpine lake where legend has it dragons once lived. Don’t leave without walking the famous Vradeto Stairs, 1,200 metres of stone steps which, until as recently as 1973, were the only access to the village of Vradéto. 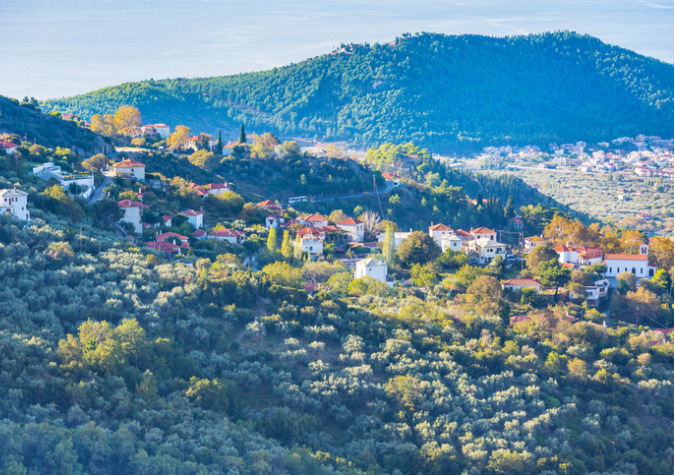 The mountain panorama from Mount Pelion is a breathtaking medley of forests, islands, beaches and hillsides with cascading white villages. This picturesque and remote area can be explored by walking the kalderimia – ancient, cobbled donkey tracks and over-grown paths. Try the three-hour amble from fountain-filled Kala Nera to the beautifully preserved village of Milies. From Milies, hop aboard the Moutzouris, the oldest railway in the country for an even more relaxed way to take in the power of nature.

Other must-sees include the 3.2 kilometre stretch of wild countryside from Tsagkarada to Damouchari with its glorious Aegean vistas. A walk from Ano Lechonia to Agios Georgios leads you through olive groves and onwards to a superb view of the Pagasetic Gulf, while a saunter between Veneto and Ano Kerasia treats you to abundant chestnut and oak trees and the historic Flamouri. 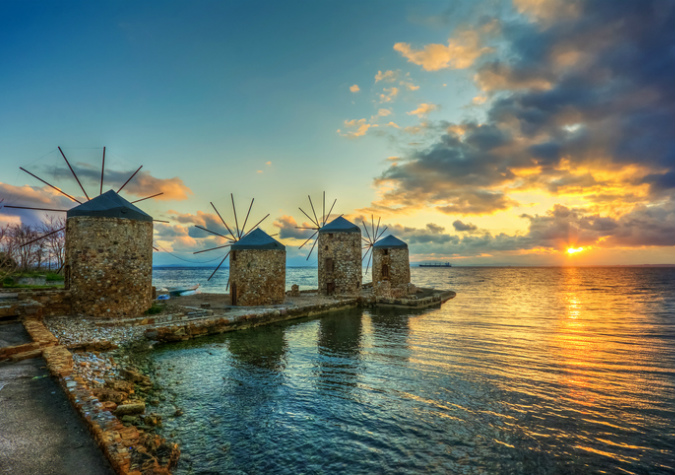 Southern Chios’s Mastihohória is a fortified complex of beautiful medieval villages where the cultivation of mastic trees and the resin they produced was once the economic foundation of the society. A turbulent history saw invasions and Arab pirates, reflected in the villages’ various fortifications and many were destroyed in an earthquake in 1881. Some have stood the test of time, the most impressive being the towns of Mestá, Pirgí, Olympi, Kalamotí, Véssa, Patriká, Vounó, Eláta and Kiní.

Today, mastic resin is an integral part of various artisanal products such as soaps and liqueurs and it is also used as a stabilising agent in Turkish Delight. You can taste it in the local mastic liqueur, Mastichato, as well as in chewing gum, desserts, breads, cheese and a sweet known as vaníllia. 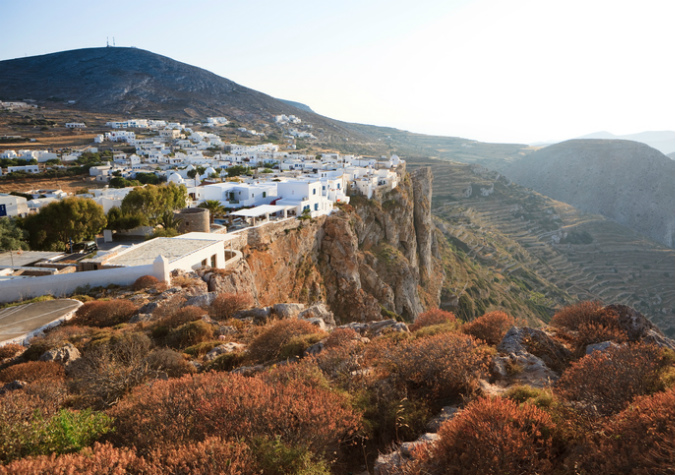 The remote rocky Cycladic island of Folégandros is a quietly fashionable spot. Head for Chóra village with its modest guest houses, secluded coves and general sense of exclusivity. Eat Greek specialties on the terraces of the local tavernas and join the locals in the tiny bars.

Chóra hangs dramatically off the edge of a cliff and is overwhelmingly pretty with its whitewashed houses and colourful wooden balconies. The walk up the hill from the graveyard to Panagia church brings epic Aegean views at sunrise and sunset.

Folégandros is a paradise for snorkelling and scuba diving, or, if you prefer to stay dry, taking it all in on a boat tour as you explore the ancient inscriptions within the protected cave of Crissospilia. Walk the stony donkey tracks to gorgeous swimming spots or stretch out on the fine sands of Angali Beach, while the partly tree-shaded pebble beach of Agios Georgios is also a lovely spot. 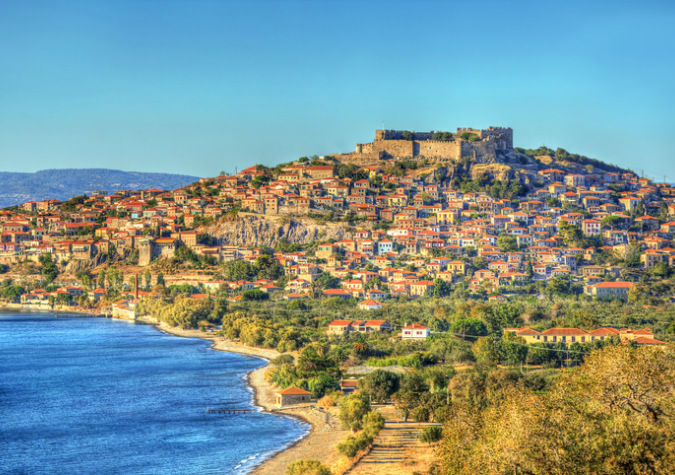 Molyvos, along with its scenic harbour, is a foodie’s heaven and the ideal place to taste the unique flavours of Lesvos.

The island is famed for its fine brands of ouzo which goes down well with small plates of mezedes.

Lesvos’s olive trees (of which there over 11 million) produce premium quality oil. You might want to combine your visit with the harvest which lasts for four months from the end of October. Harvesting is still done by hand using donkeys to transport the olives.