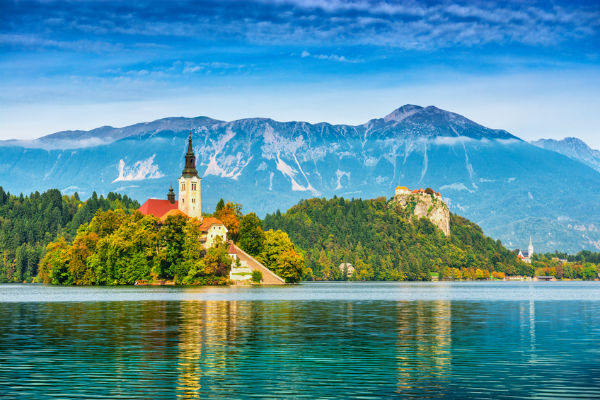 Emerald-green Lake Bled is just like the best of picture perfect postcards. There’s even a church beautifully perched on an island in the middle and a medieval castle clinging to a rocky cliff to complete the scene.

With some of the highest peaks of the Karavanke and the Julian Alps as backdrops, Bled will certainly get your camera snapping and is unsurprisingly one of Slovenia’s most scenic and popular resorts. Honeymooners are lured by the romantic setting, action seekers by the mountain and cycling trails and families for the fun of basking, bathing and boating on the lake’s waters.

Bled was formed at the end of the Ice Age after the recession of the Bohinj Glacier. Its dimensions (2,120 metres long and 1,380m wide) and depth of 30.6 metres make it ideal for boating or walking around while taking in the beauty of its leafy chestnut-treed surroundings. Most of the edge is pedestrianised and there are plenty of places to stop off at and take a dip – thermal springs warm the water to a very swimmable 26 degrees centigrade between June and August. Alternatively, simply sit, sip and muse in the several lakeside cafes along the way. 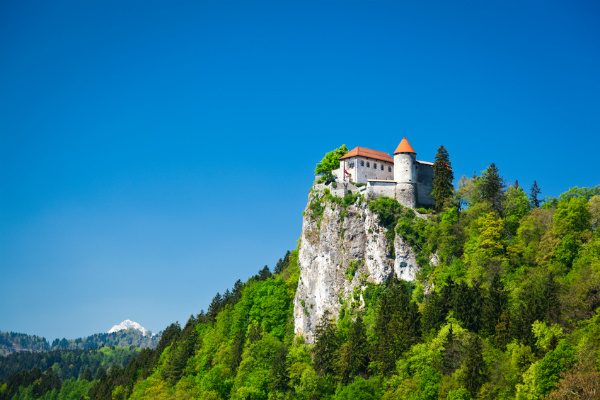 Perched atop a steep cliff around 100 metres above the lake, Bled Castle is the quintessential medieval fortress with magnificent ramparts, towers, moats and a terrace from which to admire the views. Get there on foot via any of three trails marked “Grad”.

Built on two levels, the castle dates back to the 11th century and inside you’ll find a museum depicting the lake’s history from its first moment right up to the development of Bled as a tourist resort during the 19th century. Exhibits include a large collection of weapons and armour, and jewellery unearthed at the early Slav burial pits in Pristava.

As admission is not cheap, you might like to take the opportunity of booking a table for lunch at the excellent Castle Restaurant – admission to the castle will then be free. 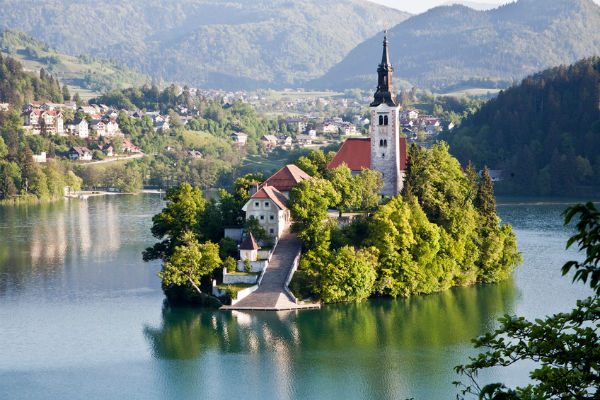 Tiny Bled Island beckons visitors from the shore with its hauntingly beautiful Church of the Assumption of Mary dating back to the 1400s, now a popular romantic setting for weddings. The real thrill is getting there by paddling a rowing boat or joining a ride by pletna (gondola). You will land at the base of a monumental sixteenth century staircase and its local tradition for the husband to carry his new bride up all the 99 steps. To add to the romance, you might be lucky enough to be there on the day of a wedding.

Enjoy tobogganing on the Straza

Fun for the young and the young at heart, the toboggan (“Funbob”) on the Straza is fun for anyone looking for speed and adventure. Open from April to October, the track is 520 metres long and you can reach maximum speeds of 40 kilometres per hour as you twist and turn your way to the bottom of Straza Hill. 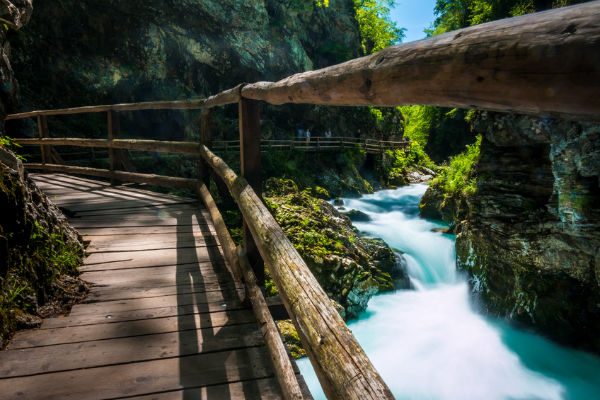 Meander on a horse and carriage

Rides last around half an hour but you can ask for longer if you like and carriages have been known to take passengers to Vintgar Gorge and even up to the Castle.

At the lido’s entrance, kayak, SUP (stand up paddle) board and rowing boat rentals are available – perfect for pottering about on the lake and with motor boats banned, you can enjoy the peace in safety.

Rowing boats are perhaps most popular if you want to meander peacefully but bear in mind the lake needs quite a bit of paddling to get around, so it helps to have at least one strong adult on board. Kids love the three swan boats which are for hire on the far side of the lake. You can also hire rowing boats at Velika Zaka on the western side of the lake, or outside Penzion Pletna and Hotel Toplice. 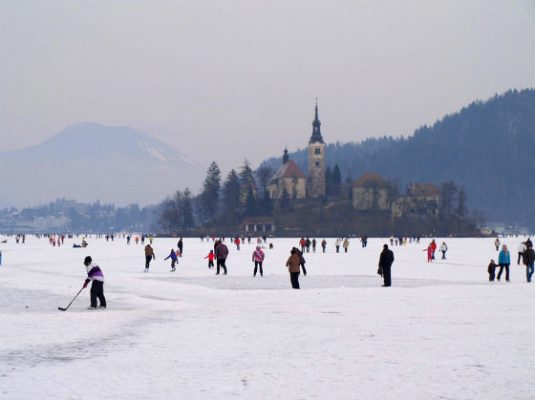 When the lake freezes over in winter and the sun is shining, it’s hard to beat the beauty of gliding over the ice on Lake Bled. Although frozen days are numbered, skating is also possible between August and April at the sports hall’s ice rink which sits on the lake front. The arena holds world championship skating and ice hockey events – that is, when it’s not welcoming visitors and locals for more sedate fun.

For a protected place to swim between June and late September, head for Grajsko kopališče, the popular public lido located just below the castle. Here you can sunbathe, swim in the lake and enjoy the two waterslides and other family amusements such as a trampoline, wall climbing, table tennis, swings, a sand box and four outdoor swimming pools.