Christmas is a magical time of year, where roughly 2.2 billion children across the world* are visited by Santa Claus and rewarded for being good kids all year.

It wouldn’t be sensible for Santa to not insure himself during such a long trip, so we were delighted when his agents got in touch and asked us to work up an insurance quote for his around-the-world journey.

For a bit of fun and with Santa’s full permission of course, we thought we’d disclose what his quote was and what factors influenced it. One pre-existing condition we did have to consider was his magical Christmas powers – a first for us! 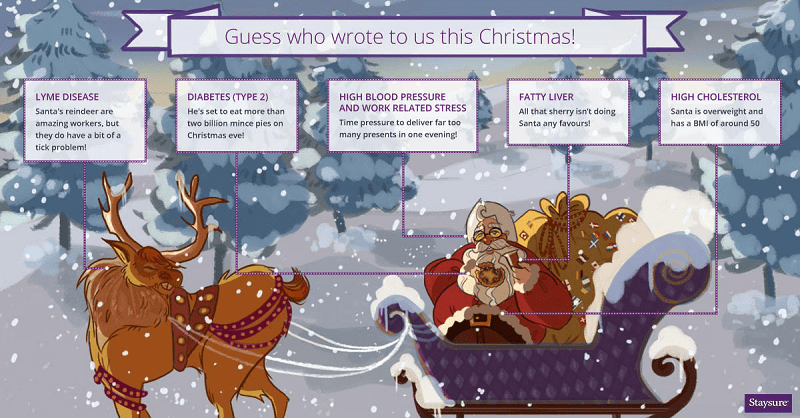 Using our quote algorithm and considering all of Santa’s possible medical conditions and the type of journey he’s going on, we issued him with an £804,000 insurance quote for the 24th December only.

Here are the factors that influenced our decision:

The many health conditions Santa may suffer from include type 2 diabetes, high cholesterol, high blood pressure and fatty liver disease from being obese, caused by an indulgent lifestyle of sweet treats and alcohol.

An example of his indulgent lifestyle: Santa will visit roughly 2.2 billion children around the world, so it can be assumed that Santa will eat over 2 billion mince pies and drink 2 billion glasses of sherry if everyone he visits follows the tradition. In total this comes to 570,000,000,000 calories, based on a mince pie containing 217 calories** and a glass of sherry 68 calories***.

Santa also has an incredibly stressful job, where he must travel continuously for hours, cover a great distance, all within a very tight time-frame. Therefore it’s likely he will suffer from high blood pressure from work related stress.

We also had to take into consideration the possibility of Santa contracting Lyme disease. Ticks are the main cause of Lyme disease, and unfortunately reindeers suffer from ticks just like the average deer, so because Santa regularly interacts with them, he is at a higher risk of catching the disease.

If Santa were to give every child he visited a present, he will be carrying 2,200,000,000 presents. At an average but modest value of £10 per present, that makes the total value of his sleigh at least £22,000,000,000. This increases his insurance premium because the contents of his sleigh will be insured as part of his unique policy with us.

There are people celebrating Christmas on every continent of the world, so it can be assumed Santa will have to travel the whole world, which has a surface area of 510.1 million square miles****, however for the purpose of this exercise we calculated the distance Santa travels by viewing his journey in a linear format.

Using the distance he travels within a 12-hour window, it can be estimated that Santa travels at a speed of 42,500,000 mph. Travelling at such fast speeds and for such a long distance carries a very high risk factor and understandably results in a high insurance premium.

As part of Santa’s journey, he takes part in a few particularly risky activities which are just as important as covering his journey.

Activities Santa wished to cover include riding in a reindeer sleigh and rooftop walking (which we estimated to be on a similar risk to glacier walking which is covered in our Winter Sports cover).

“We were thrilled to receive a message from Santa’s agents enquiring about Christmas Eve travel insurance. It does cost a bit more than the average adventurer, however Santa has a very unique lifestyle and job which significantly increased his insurance quote. That doesn’t deter us from insuring him though, we pride ourselves on insuring the over 50’s no matter their lifestyle, age or occupation, because everyone should be able to get good quality cover.

“With his own tailor-made plan which covers his many health issues and long journey, we have ensured Santa will have peace of mind rewarding all of the good children across the world!” 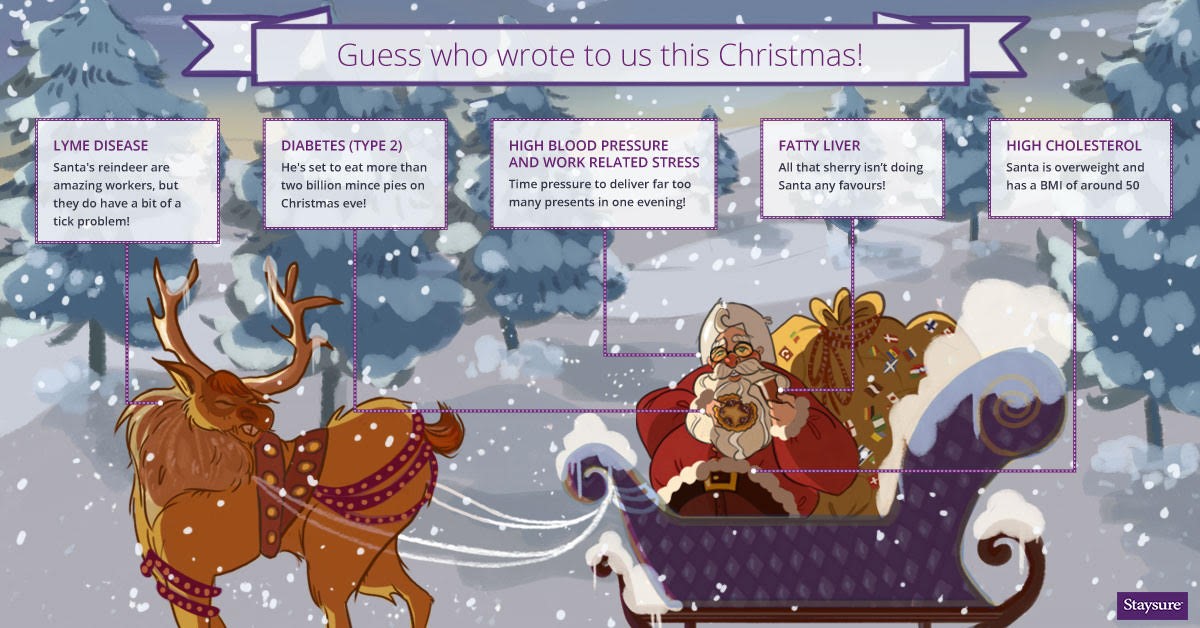